As some of you may know or maybe you don’t… most of my helmets have a story behind them. A throwback, tribute or theme predominantly associated with 80’s/ 90’s MX and the racers of that time. I’m kinda stuck in a time trap, I love that era, the bikes, the attitude, the style, the bold colours. When i’m not racing i’m collecting and working on old MX bikes, & its not uncommon for me to turn up at my local MX track in full retro gear, open face helmet and one of my 500’s. I try and incorporate influences from that period in my own racing too… the zebra pattern in my race suits and my helmet designs for example.

Yesterday I showed you my first Arai for the 2020 season , which people seemed to like, so I thought I’d give some background to it…

‘Life’s A Beach’ (the writing on the back of this lastest helmet) is a brand that started life back in 1984 by 3 friends who toured the motocross scene. This led them to Florida a few months of the year & whilst there they would spend time at the beach.  They were basically offended by the spandex beach fashion surrounding them, so they began to create alternatives… baggy surf shorts made out of any material they could get their hands on… curtains, tablecloths etc.

Things were slow to start but eventually the brand took off. The guys became friends with a stand out character of the MX world, racer Ricky Johnson. Rick was my childhood hero (which is how I came to know about the brand) as a kid I would spend hours studying the latest MX magazines and one time Rick wore these shorts over his riding gear. Rick also had the nick name ‘bad boy’ after some disagreements with other riders who had tried to take him out and he became a member of the ‘bad boy club’ which was a sub division of the ‘lifes a beach’ brand. Again you have probably seen ‘ Bad Boy’ & ’Bad Boy Club’ featured on some of my own previous helmet designs, a tribute to Rick. 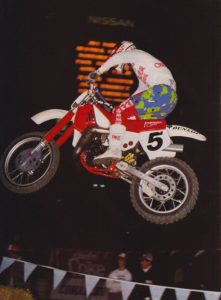 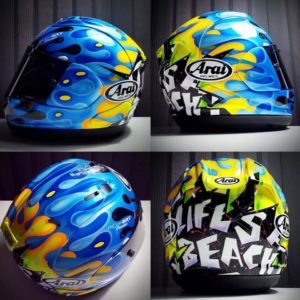