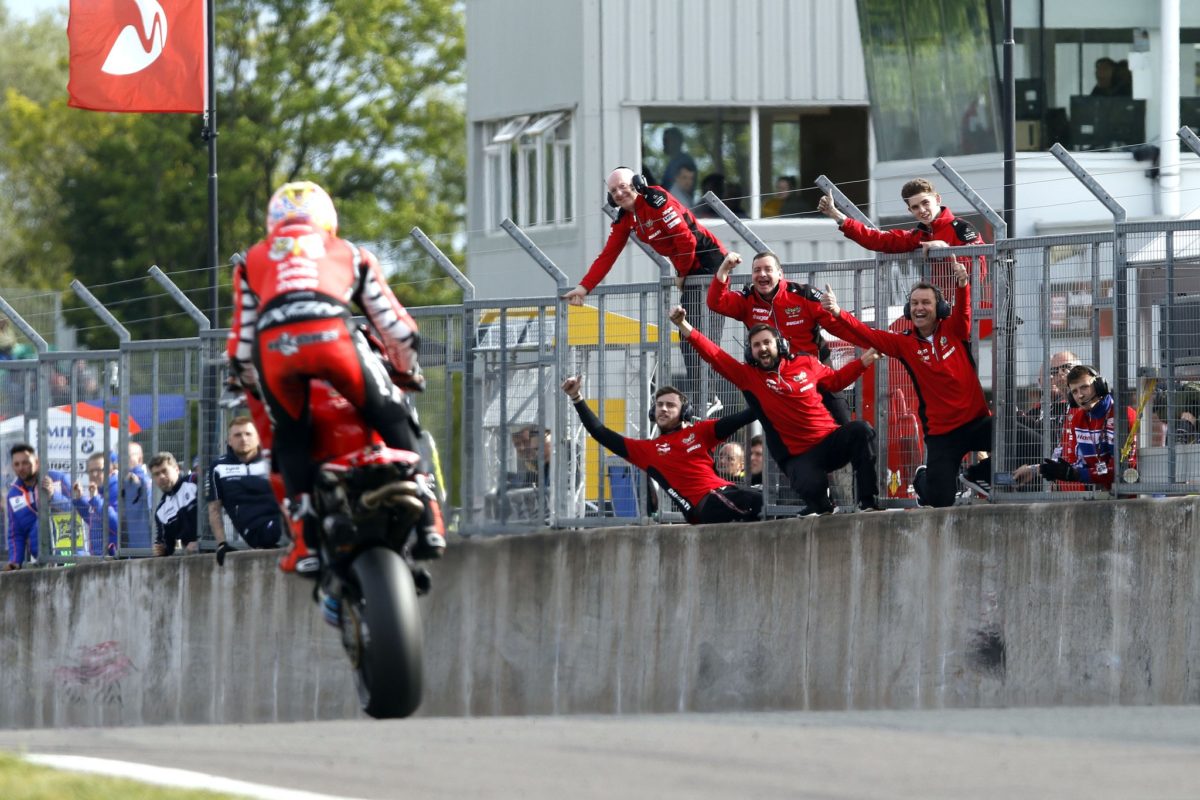 I entered Round Two of the British Superbike Championship at Oulton Park with zero points, That’s not a good place to start when you have joined a new team for the season with high expectations on all sides and in one of the most competitive race series in the world. But I walked away victorious. And I have to say that weekends like this are golden moments in racing. From juniors starting out, to like me, when I have been fortunate to make a career out of it. My very first race on a motorcycle was when I was 4 years old in 1988, riding a QR50 and I have raced every year since. So I learnt a long time ago not to get too built up or hung up on a single race result.

That bad weekend at Round One Silverstone, where various technical issues saw me leaving beaten in the points chase, but full of determination not doubts about what lay ahead. This is a prime example of the circumstantial, emotional waves of racing that can’t be avoided. This time last year I was also preparing to ride at the Isle of Man TT on the Norton SG7.

(finishing 5th in the Senior becoming the fastest ever norton and Aussie rider around the Isle of Man roads course). I had an uncommon contractual arrangement that I had negotiated. It was agreed that I could ride with Norton at the IOM while I rode a Yamaha in the BSB.

This year I am riding for Paul Bird (PBM BeWiser Ducati team) on the all-new Ducati V4R Superbike. This is the official Ducati supported team (factory team). That being said there are no ‘full factory’ run teams by any manufactures in the BSB series, so whenever the reference to ‘factory team’ is made this purely relates to the teams who have, primarily the racing budget from that brands UK headquarters (generated by UK motorcycle sales) and also in some cases have access to confidential parts or be higher up the line for delivery of new developed parts. (each brands circumstances vary slightly)

While Ducati’s new V4R has already stirred up World Superbikes, so early in the season, there is much more to it than you will read about and probably less complicated than you will hear from people who are watching what is happening. So let me tell you a bit about the bike and my role in it.

The V4 was built to win the WSBK championship. It’s quite simple logic, the motorcycle public gain the faith in the product and buy from that brand when the moment comes to buy a new motorcycle. For example, you can’t buy a moto GP bike but you know that Ducati make fast, powerful, reliable and good handling bikes when you see Dovi win races. This also has to happen in Superbike because this is the racing machine that the general public can actually go buy. So this is the bike Ducati needed to build to win this championship.

They have employed a great rider in WSBK (ex-MotoGP racer Alvaro Bautista) But that’s the final piece, Ducati have gone from drawing board to concept to manufacturing with just one focus in mind and that is to build a road motorcycle with a racing winning pedigree/DNA. This means the base platform is at a standard capable to win the world championship and that is what every person is getting when they buy one for the road or for racing.

Alvaro has won so much because he has a support network behind him that is as strong as the motorcycle. All manufactures go to every corner of the rule book to find ways to improve the results of their bike but there always comes a moment when within the rules they can’t make the bike better than the competition, this normally lays with an inherent problem with the production bike. Hence why the new Ducati V4 is great step forward for racing, and will most likely stay winning until the rivals come with a new model to combat this.

This is where I have a roll. What we are trying to do in BSB is show what is possible with this new Superbike within the rules of our series. BSB unlike WSBK has a controlled ECU by Motec in conjunction with the series promoter. This restricts us from using any for of rider aids, for example ‘traction control’. So this means we have less tools to find advantage and possibly rely more on Ducati’s hard work making this new V4R as the base platform we go racing with.

Ducati race department is a relatively small factory so everyone outside the WSBK effort will waiting in line to order for parts and development parts that come later as more refinements can be made. For me, this makes our team’s dominance at Oulton Park even sweeter than it might already be. We have still a lot of room to improve and will work closely with Ducati in the process.

The V4R Superbike has a long way to go to win both the WSBK and British Superbike championship. But right now, sitting here in the UK I feel we are in the right place at the right time to make a bit of history.

I am based in the UK during the race season but I still try to keep in touch with what is goingon in Australia. When the V4R starts racing in Oz these competitive attributes should be noticeable there too just like any other domestic series around the world.

As i said earlier it comes in waves, and at the moment its feeling pretty good so I will just take a second to enjoy this thanks.