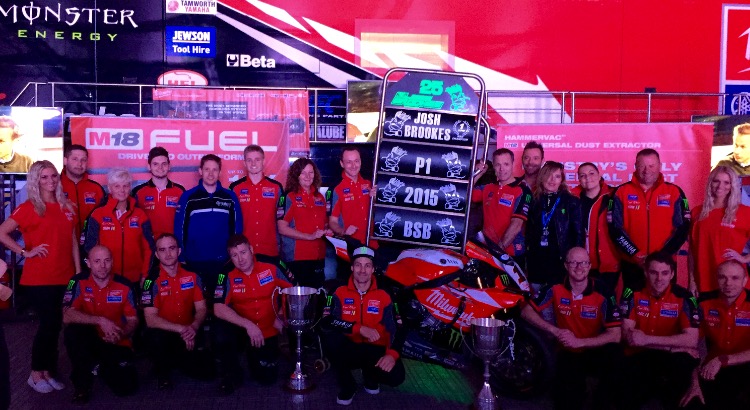 It’s moments like this words aren’t enough. Its a feeling to win a championship and that I can’t say in simple words.

The big public moment is stood on the podium. The real and less climatic moment is some time later, it’s not a specific moment but a process of reflection. Its been 14 years since I started racing on tarmac and half of its been in BSB. 7 hard years of bashing bars in the British Championship can only be justified by winning.

If getting pole positions and setting lap records throughout the season wasn’t enough, it was a 2x Triple Double that was my highlight of 2015.

But i’ve not done it alone…

Thanks to Shaun Muir and Dale at Milwaukee, the SMR team have gone to the top level, without a doubt the best team in the championship. Every person in the team, in their own way has contributed to my success. Stewart Winton & Ian Lord have made this dream a reality. What they have done with the bike and also with me, has been clear to see.

Also a big Thank You to all the sponsors and especially my personal sponsors (Tamworth Yamaha, OAKLEY bluewater, Stevenage Sheet Metal, Milspec, IXON, Arai, Kennedy’s Watch shop) some of which have now become great friends and to everyone for supporting me, from fans to family… you’re all great!

The most important thank you is for my partner Aimie, she is beside me always and makes me who I am.