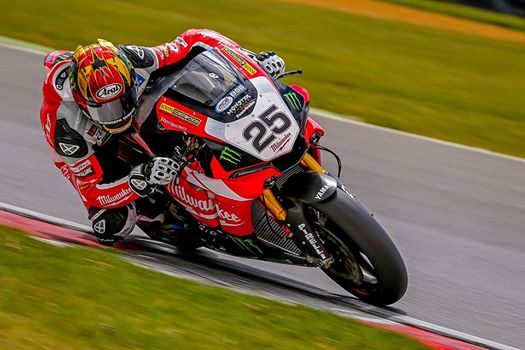 Last week I was at Snetterton for the Official BSB test.  We had some new parts for the bike so it was good to spend some time making changes and experimenting away from the race weekends.

One of the changes was having a new design fuel tank. This was the first version and further alterations are needed but the idea is to position the fuel lower in the bike, centralising the mass. With the standard tank there is a lot of extra weight up high, for the first few laps of the race until some of the fuel has been used. So we found having the new tank on the bike combined with all the other set up changes we tried, made a huge difference to the overall performance.

I was pleased with the fast, consistent lap times throughout the 2 days of testing (in the 1,47’s) but even more so to become the first rider to dip into the 1m:46s lap time and a full second under my own lap record.  It has been a perfect test in terms of what we have been able to try, the lap times, the tyre wear and the conditions. It was really valuable for us as a team and now I’m looking forward to getting back here in a couple of weeks for the races.