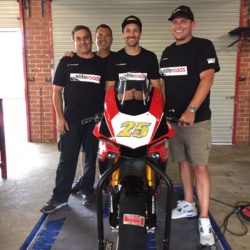 To ask a favour from the public, friends and fans is not something I ever antisipated doing however the simple truth is, building a race team from scratch, sourcing all the parts, preparing the bike and with Australia being the furthest and most difficult place to import the bike to, freight has been a major factor that has overshot the budget.
I have invested as much as I can into this and I’m super lucky to have some sponsorship from amazing companies such as Elite Roads, Milspec Services, Cleaningshop.com.au, AluminiumOnline, Mr Leaf Screener & Mudbuster, but at this point we have already spent our budget of $100,000 and still have a shortfall of $30,000 to raise before the event.

I understand that people will have a mixed view for the GoFundMe campaign but the irony is I’m spending the money I’ve earned racing to go racing, How can I be more dedicated?
I’m asking for help because I need it & I know people can make a difference. I was extremely reluctant to even take this path but what finally swayed me was a comment from a friend who said he’d always followed my racing & wanted to help but he’d never been in a financial position to be a sponsor & was embarrassed to offer a small contribution.
It planted a seed with me, that people who will make a contribution will have a greater connection with the race. You won’t only watch it for entertainment…you’ll have that excitement factor to see the result. Like when you put a bet on a horse, it’s your money on the line- no matter how big or small the bet was.
So I’m really greatful to every person who has contributed so far, it’s great to read your comments & have you part of this. I hope you’ll be squeezing the programme watching the race