Round 1- Pole Position and Podium 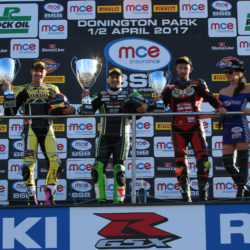 Last weekend was Round 1 of the British Superbike Championship at Donington Park. Pre season has been predominantly wet so Fridays 2 dry practice sessions were a welcome change. This was also the first time all BSB teams and riders were on track together, so to be consistently quick throughout was a great display for me and the team.  Free practice 3 on Saturday morning was back to wet and I was fastest for most of the session. Choosing to stop early and not take excess risk resulted in being just bumped back to 2nd in the times.

Qualifying was cancelled because of track conditions so the grid was formed by the combined practice times. My best time in practice was 3rd fastest, so I started from the right hand side of the front row in Race 1.

I got off to a good start but the argy bargy on lap one pushed me back to 9th. throughout the race I was analysing the bike and recognising the areas that were holding me back. At first the only issue was too much engine brake causing the bike to back in a little on corner entry and chatter in the tight corners. Even so I was able to move up to 5th position and set the fastest lap of the race. But with 8 laps to go my lap times were really dropping off from bad tyre wear so I was just hoping to hold my position to the end. With 3 corners to the line the bike surged for fuel and we disappointingly  lost 2 places for 7th.

After checks we found the tank was still holding 2.5 litres so its a baffle problem with that particular tank. Another tank was fitted, clutch setting change, engine brake adjusted, and some minor suspension refinements ready for race 2. As I set the quickest time in race 1, I would start from pole position.

I lead into the first turn and continued to lead for most of the race. The adjustment were a good step forward, my position and lap times showed. With about 5 laps to go I was passed by Leon Haslam, at that point of the 20 lap race my rear tyre was well past its best and to try put up the challenge was to much to risk as I had over 4 seconds gap back to 3rd. I consolidated for the 2nd place finish.

I used the softer option (sc0) rear tyre in both races because of my experience in 2015 when it was very difficult to make the harder (sc1) tyre do the fast lap times needed to win the race. However the challenge on the sc0 has always been finding a bike set the will keep the tyre working right to the end of the race. Now in 2017 the sc1 tyre is much improved, meaning its a realistic option to use in the race. It’s slightly lower outright performance is over shadowed by its endurance and as I saw at the weekend, can out perform the sc0 in the closing laps. This can all be affected by bike set up, rider style and track temperature…. But I expect tyre choice to play a bigger role this season.

Considering we’ve had limited time as a team and everyone is still getting to know each other,  the guys did a great job between the races to improve the bike, which enabled me to lead most of the second race and finish on the podium. Theres still a lot of room for improvement too, but after this first round we know what is needed and where to make small changes, we’ll get an even better package be ready for round 2.

I have to give credit to the Tag Racing Team for all their hard work over the off-season, they’ve done a great job to build me a competitive bike from the start in the wet and dry. 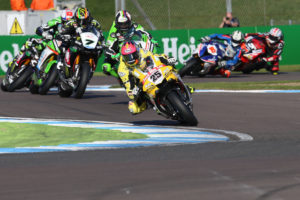 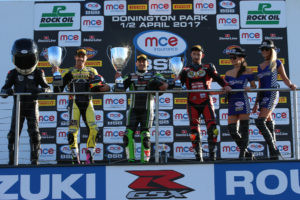 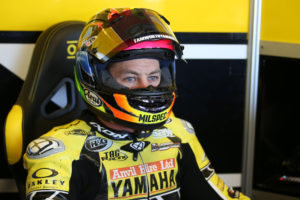 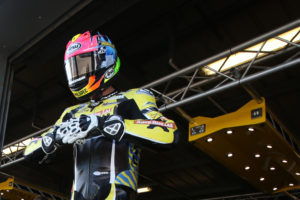