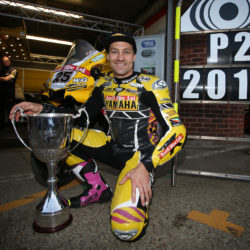 The first two races this weekend we had a couple of issues, not something really noticeable but enough to break my concentration and race run. The bike worked perfectly in the last race, I could ride it confidently to a win and to be sat here to be second in the championship is a wonderful feeling, even though we just missed out on taking the 2017 British Superbike Championship by 3 points.

VIDEO: Josh Brookes won the final race of the season – he talks about finishing runner-up in the championship title fight!